Art in Island‘s reimagined version of Francois Boucher’s Nude on a Sofa, complete with two children sneaking a peek at her butt. Photo by me.

I recently visited the interactive art museum Art In Island in Manila, where visitors are encouraged to take photographs with large murals painted on the walls. Some of these murals are inspired by famous works of art, and some are inspired by famous works of art featuring naked women. Seeing the way that these female bodies had been recontextualised, into a space where visitors were encouraged to interact with them, made me realize something: it’s time to talk about the Female Nude in art history.

I’ve decided to refer to images of naked women that are widely considered to be Fine Art as “Female Nudes”. Although I’ve labeled this post NSFW, because the images in here are pretty explicit, none of them are considered dirty or pornographic. You’ll find them in museums, in fine art books and on university slideshows. This is because the Female Nude is not naked. She is, bizarrely, “dressed up”.

The Female Nude is visually removed from reality and presented to the viewer in a way that enables us to gaze upon her freely and without guilt. By visually emphasizing that these women are part of a shared fantasy, artists have been able to create culturally acceptable images of nakedness for centuries. These paintings are extremely culturally valued and considered a vital part of the Art History canon – much more so, in fact, than many female artists themselves.

The Female Nude is kind of a style or genre in and of itself, following specific visual guidelines and cues. The Female Nude genre that I’m talking about can be seen in Western art history from around the 15th century onwards, up until around the end of the 19th century. There is no way of ascertaining exactly how consciously or strictly these visual guidelines were enforced, especially in such a large time period. However, certain reactions to paintings that broke these “rules”, which I will look at near the end, shows that nudity that didn’t follow these guidelines often caused some degree of controversy or moral panic.

By recognising patterns in how Female Nudes are created, we can learn more about how gender is defined through some of the most famous artworks in history. This can help us theorise why only certain images of female nudity are celebrated and accepted, and how this impacts our views on these paintings today.

Wait – how do I know if a painting is a Female Nude?

Good question, imaginary viewer! How can you tell if a painting can be classified as a Female Nude – that is, “Fine Art” – rather than something “naked”, “inappropriate” or “pornographic”? Here are a few helpful questions that you can ask yourself to figure it out.

1. Is the subject in a contemporary Western setting?

(And when I say contemporary, I mean contemporary to the time that it was painted.) If a subject is not painted in “reality”, then it makes the nudity safer, because it’s a fantasy or fabrication. A good way to check this is to see if the subject is in a mythological, ancient, non-Western or otherwise exotic setting. Have a look at some examples:

Lucas Cranach was a German painter, here depicting the nymph of the Castalian spring, where philosophers and poets would go to get inspiration. The nudity is acceptable because it’s a fantasy, set strictly in a mythological world. This is an early example of a common trope: the beautiful woman that serves as a muse for creative male geniuses.

This is an example of Orientalist painting, a style of painting popular in the nineteenth century in which European artists would paint scenes of the Middle East. These scenes were usually completely unrealistic and filled with racist stereotypes. The Slave Market is a complete fabrication, and the exotic setting makes the nudity acceptable.

2. Is the subject’s body hairless and/or are their genitalia hidden?

Hairless bodies or bodies without visible genitalia make the subject otherworldly, as two things that signify “real women” – body hair and genitalia – have been removed. Again, let’s look at some examples:

This is what a Barbie doll’s genital region looks like. This painting is set within a mythological setting, as the subject is a reimagining of Aphrodite or Venus. The spring that she stands on is sacred to the Muses, and the ivy next to her symbolizes Dionysus, the god of wine and sex. The painting was of course received enthusiastically when it was first exhibited.

3. Is the subject passive?

This factor is slightly harder to define, but what you have to look for is the way that we are allowed to look. How much power do we have over the subject, and how freely can we look at them? The Nudes we’ve examined so far are all reclining, sitting or standing passively in an open invitation for the viewer to look. Often the subject will avert her eyes, sometimes throwing an arm over them to emphasize her passivity and allowing our gaze to roam, uninterrupted and without guilt. Here are some examples: 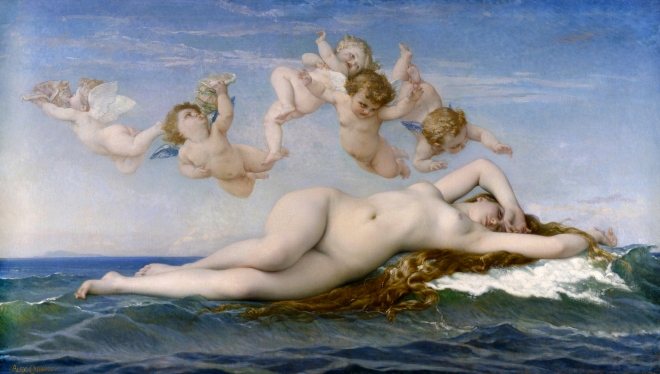 Not only is the subject here averting her gaze, throwing her arm over her eyes and reclining in a way that opens up her body for the viewer’s gaze, but this image is also one of the most perfect examples of a Female Nude. Cabanel could not have made the setting more fantastical or made his subject’s body more hairless if he tried.

Another painting by Ingres! The subject’s passivity here is obvious. Her back is turned towards the viewer, and the artist encourages us to look at her naked body. This painting emphasizes the element of voyeurism inherent in the female nude, as the viewer is positioned behind her rather than in front.

The re-imagined La Grand Baigneuse at Art in Island. The passiveness of the subject is recreated, allowing the viewers to pretend to tattoo her body.

Controversial paintings that broke the rules

To make the distinction between the Nude and nakedness extra clear, it’s useful to look at famous paintings and images of naked women that broke some of the above rules, and therefore became infamous. Some of these are now so tame that it is hard to understand why they would ever have been controversial.

La Maja Desnuda (The Nude Maja) is one of the earliest paintings in Western art history to show female pubic hair. Francisco de Goya painted two versions – one naked, and one clothed. In addition to the pubic hair, the bold gaze of the subject was highly controversial, as was her contemporary dress. Her clothing identifies her as a maja, a member of the Spanish lower classes. 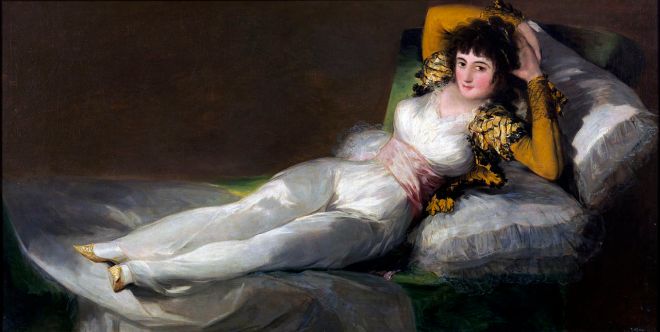 During the Spanish inquisition, the painting’s owner and Goya himself were charged for moral indecency. Goya managed to escape the charges by claiming that he was following a Spanish tradition of nude female art.

What made this painting controversial is that its setting is so obviously contemporary. Although it draws on classical sources, Olympia’s fashion accessories, and the slave at her side, mark her as a contemporary Parisian woman and, more specifically, a sex worker. In addition to this, the subject is not passive in her reclining pose. Her hand is splayed over her genital region, hindering us from looking at it, and her gaze is almost defiant. It’s these subtle subversions of the Female Nude formula that made Manet’s painting so controversial in 1863.

This is one that raises a few eyebrows even today. Courbet was a Realist, which meant that he believed firmly in painting objective truth. L’Origine du monde (The Origin of the World) was supposed to push the limits of what was acceptable by rejecting the smooth nudes of the Academy, and displaying a graphic, unapologetically realistic naked female body.

Do women have to be naked to get into the Met Museum? 1989, the Guerrilla Girls

Do women have to be naked to get into the Met Museum? 1989, the Guerrilla Girls

There’s something important I have to point out here: None of the famous, controversial works breaking the rules of female nudity are actually painted by women. It’s only quite recently that female painters have been allowed the training and freedom of expression to paint their own representations of naked female bodies. Although this work by the Guerrilla Girls is a contemporary rather than art historical one, I still consider it an important depiction of female nudity in art, pointing out that representations of naked female bodies are still a lot more popular than actual female artists themselves. (The statistics reported in this work are still more or less the same, 26 years later.)

If we can recognise the Female Nude, we can challenge it.

I’ve mentioned Art In Island throughout this post, because of the way that visitors to Art in Island are encouraged to interact with painted Female Nudes. These rather explicit paintings are allowed to be exhibited in a family establishment because they are Nude rather than naked. It’s an example of how a centuries-old tradition and visual language still affects how we view and interpret these paintings today.

All of this is, of course, not to say that artworks should not depict naked women. It’s important to note, however, how they depict naked women, and that there is something amiss when the only acceptable paintings of female sexuality are those specifically painted as an unrealistic fantasy. There’s also something wrong when there are more famous Female Nudes in Western art history than there are actual female artists.

In this post I’ve provided a short 101 on how to recognise the hallmarks of the Female Nude and how it affects us as contemporary viewers. By being able to point directly to the aspects of visual imagery that influence the ways we view gender, we can more easily challenge them. So, the next time you see a classical painting of a naked woman, go through the checklist and see what you find! Happy sleuthing!

“What does an Art Historian actually do?”