Artist Feature: Who was Anna Ancher?

Anna Ancher is famous in Scandinavia, but basically unknown in the rest of the world. Which is a shame because we always need more discussion on awesome female artists in art history.

Movement/Style: Part of the Skagen artists’ colony. She’s usually associated with Naturalism, and sometimes with Realism and Impressionism.

Country: She traveled a bit around Europe, but lived, worked and died in the small town of Skagen in Denmark.

Well, who was she?

Anna Ancher (1859 – 1935) was a Danish painter active in the late 19th and early 20th century. She was part of a group of artists and other creative people who briefly lived and worked in the small fisherfolk village of Skagen in Northern Denmark, known as the Skagen colony.

In the nineteenth century, colonies like this were pretty common. Between 1830 and 1910, over three thousand artists in Europe joined the different rural artists’ colonies that were established around the continent. This was a reaction against the increasing amount of industrialization in the cities. Artists who joined colonies often wanted to reconnect with a simpler way of life. As Skagen colonist and poet Holger Drachmann put it, “…I want to return to nature, to the naïve, the original, the uncomplicated, whatever you want to call it.”

Holger Drachmann, in all of his poet glory.

Inspired by Naturalist and Realist philosophies, which valued objectivity and authenticity, the Skagen artists wanted to paint “the truth”, which generally meant “the ugly” or “the primitive”. They painted the local fisherfolk in ways that reinforced their primitiveness (because of their lower class and remote location) with rapid brushstrokes and plein-air (open air) painting.

Famous Skagen artist P. S. Krøyer and his wife, Marie. These photos should prove that the Skagen artists were truly the Scandinavian hipsters of their day.

Anna Ancher was the only member of the Skagen colony who was born and raised in Skagen. Since artists usually only visited rural locations for a few months at a time, Anna Ancher had superior access to the local Skageners compared to her peers. The sense of intimacy that she paints her subjects with is often attributed to this.

Give me the gossip!

Anna Ancher lived a pretty drama-free life for an artist, so unfortunately there’s not much juicy gossip here. She was the daughter of the innkeeper at Brøndum’s Hotel in Skagen. When artist Michael Ancher came to Skagen to paint in 1874, he stayed at Brøndum’s and took notice of Anna, who was only fifteen at the time. The next summer they were secretly engaged. They married in 1880 and remained married throughout the rest of their lives in an apparently stable and creative marriage. The painting Judgment of a Day’s Work shows the couple sitting together and discussing a recently completed painting. 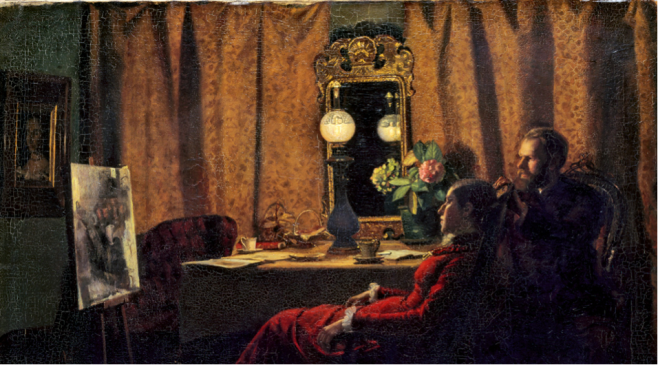 Judgment of a Day’s Work (detail)

Anna seems to have been a kind and positive person, and as far as I can tell she was universally well liked.

Give me a quick selection of her art! 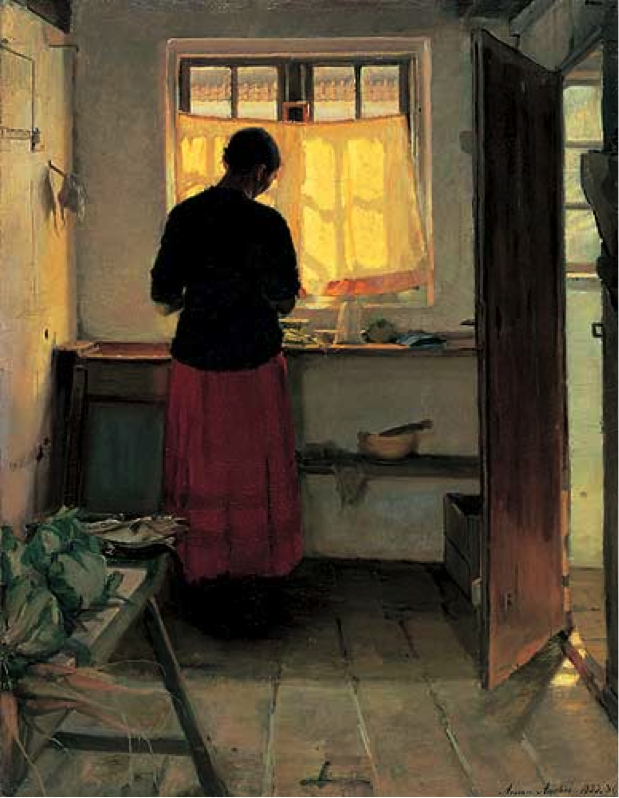 Anna Ancher painted dozens of images like this, of women engaged in domestic tasks with their back to the viewer. It allows for a sense of voyeurism but also of intimacy as we’re allowed into quiet, private moments in the life of the subjects. 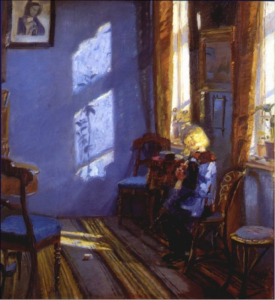 This is one of my favourite paintings. I have a small reproduction of it on my wall, and I’ve even been to the room that it depicts (located in the old annex of Brøndums Hotel in Skagen). The subject is Helga, Ancher’s daughter. The focus, however, is not on her but on the colours and the startling patches of sunlight cast by the windows.

Portrait of the Artist’s Mother, 1913

Where can I look if I want more information? (+ References)

If you’re able, I really recommend an actual trip to Skagen. You’ll have to get to Copenhagen and then drive or take the train to the Northern-most tip, but if you’re interested in the Skagen painters or enjoy Danish beach vacations it’s really great. A few of the original artist-colonists helped establish the Skagen Museum in the early 1900s and it’s still there today, with a stunning collection of the colony’s artwork. Anna and Michael Ancher’s house is still preserved and you can go inside and have a look around. When I visited, I was even lucky enough to stay in Brøndum’s Hotel, the nineteenth-century building where the original artist-colonists gathered, lived and socialized.

If going all the way to Skagen is not really a possibility, there’s some good literature that you can check out if you want to learn more:

“I’m wondering about cobalt and the story about blue colours being so expensive in the past”: A Very Short History of Colours.

“How can I love artists like Gauguin when I know so much of his work was exploitative and racist?”