A Brief History of Hairless Vulvas in Art

Aah, nudity in art, a subject dear to my heart. Vaginas and vulvas (with vulva referring specifically to the external genital region) in art have a quite different history than penises do, ranging from being symbols of fertility and life to being symbols of shame and impurity. As I wrote in my post on the Female Nude, hairless vulvas have been around in art for a long time. How long? At least 2,000 – 3,000 years, and maybe even since the beginning of art as we know it.

(I’d like to preface this with saying that there have been very few large studies of vaginas and vulvas in art, especially in older art, so I’m slightly limited both by the information that is out there and the time I myself can spend researching. This summary is, as it says in the title, very brief. However, we can definitely conclude that hairless vulvas in art are not new.)

Let’s start from the very beginning: when did vulvas first start getting portrayed in art? Well, arguably, an image of a hairless vulva was one of the first known artworks ever created. Created c.a. 35,000 B.C.E., this image was carved on a cave wall in Vézère Valley, France. Although it might not look much like a vulva to us (and what it represents is still up for debate), when it was discovered, it was deemed to “fall broadly within the range of ovoid forms traditionally interpreted as vulva”.

Thousands of years later, from c.a. 29,000 B.C.E. onwards, the so-called Venus figurines start popping up. These were stylized statues that mainly depicted bodies with exaggerated hips, breasts, thighs and – you guessed it – vulvas. We don’t know why they were created, but they’ve been found all over Europe, Eurasia and as far away as Siberia. Although it can be hard to tell, most of these statues seem to have hairless vulvas, sometimes even with very pronounced hairless labia.

Fast-forwarding a bit in history, there’s a famous early nude statue dating around 2,500 B.C.E. from the Indus Valley Civilisation (where northwest India, Pakistan and northeast Afghanistan now lie) called the Dancing girl of Mohenjo-Daro. The presence of pubic hair here is somewhat ambiguous, especially given the stylized nature of the piece. Although she, at first glance, appears hairless, there are some lines along her pelvic region that could potentially indicate pubic hair.

Later still, around 1,800 B.C.E., we have the Burney relief, a Mesopotamian terracotta plaque showing a nude figure with wings and talons, flanked by owls. Although the genitalia has very little detail in general, there is definitely no hint of pubic hair here. 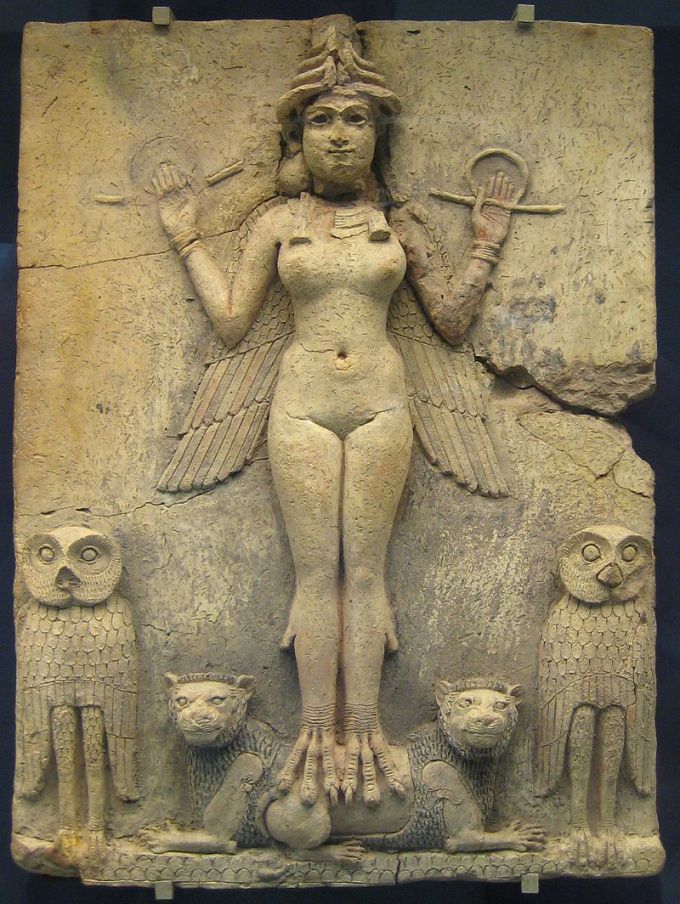 These are just a few, famous examples of the thousands of ancient sculptures with vaginas. Since most of the early artworks that still survive are in sculptural form, this could account for why many ancient depictions of vulvas are sans pubes: it’s very hard to render tiny hairs in a sculpture without more modern tools. Many ancient statues depicting penises follow the same pattern of hairlessness.

Keep in mind that there are definitely depictions of vulvas with pubic hair from these time periods. They just don’t seem to be quite as common. In some Ancient Egyptian placques and paintings, especially from the Ramesside period (1,292 – 1,069 B.C.E.), pubic hair on female genitalia is shown through painted triangles. A famous possible example of this black painted triangle style is in the Turin Papyrus from the Ramesside period, the earliest known depiction of sex in art.

What looks like visible pubic hair in the Turin papyrus. Edited by me

It’s obviously fairly impossible for me to go through every depiction of a vulva in ancient art, let alone in every cultural artistic tradition. It’s fair to say, however, that hairless vulvas have been part of the nude figure since the beginning of art history, and that this is the case in many different cultures across the world.

Let’s shift our attention to a form of art that inspired pretty much all Western art that came after it, including depictions of genitalia: Ancient Greek sculptures.

Many Ancient Greek sculptures depicted nude figures, and if these figures had vulvas, they were almost always completely hairless. These sculptures have been hugely influential as portraying a sort of “ideal” body. It should be noted that Ancient Greek sculptures were originally painted with bright colours that have since faded. It’s possible that they originally appeared with a full painted bush. However, this theory doesn’t completely hold up, considering that many statues with penises have pubic hair carved into them. Some researchers today theorise that the reason sculpted Ancient Greek vulvas did not have pubic hair was that this would have made them too sexually aggressive. 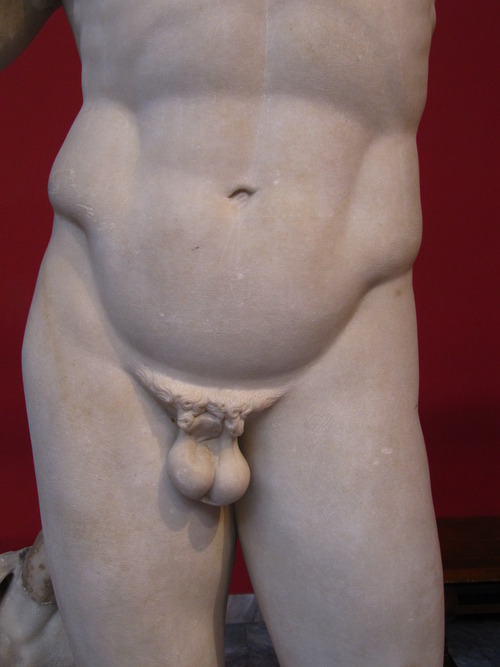 During the Renaissance, artists began looking back at the Classical era of Greek sculpture and were heavily inspired by it. Renaissance sculptures follow the same pattern as those of Ancient Greece: bodies with vulvas were always hairless, while those with penises were either hairless or had pubic hair carved into them.

Around this time surviving paintings become much more frequent, and even here vulvas were mostly hairless, although there were of course exceptions. German artist Heinrich Aldegrever’s print Eve with a stag (c.1540), for example, shows her with pubic hair. More often than not, though, nude paintings from this period were hairless. This goes for both penises and vulvas, although penises were much more likely to have pubic hair. Albrecht Dürer’s Adam and Eve (1507), for example, is comprised of two paintings of both Adam and Eve nude, and although their genitals are covered by leaves, Eve is clearly hairless while Adam has a hint of pubic hair.

Birth of Venus, 1875, Alexandre Cabanel. Oil on canvas. An example of a Female Academic Nude.

This is where the Female Academic Nude comes in. The Renaissance tradition of the hairless female nude remained popular, and – affected by other styles and movements – grew into the types of nudes we see in 17th – 19th century Western art. You can read more about this type of nude in my post about it, and how the hairlessness was part of making the nudity acceptable. By removing markers of “realistic” bodies, including hair, the nude could be safely situated in an unreal fantasy world and was then considered suitable for public consumption.

Middle-Eastern nude art was similarly hairless around this time, specifically in the Islamic miniature painting tradition. Mohammad Qasim, a miniaturist, painted Lovers’ dalliance in the mid-17th century, in which the vulva is clearly on display and clearly hairless. The nude became an important new genre in Persian painting during this period. Mohammed Qasim was the student of Reza Abbasi, who painted two works in the 1590s showing a semi-nude woman asleep that are considered the first true “nudes” (a.k.a. fully nude bodies that are not just literary illustrations) in Persian painting. When men are depicted in the nudes from this period they are usually fully clothed.

Tako to ama (The dream of the fisherman’s wife), 1814, Katsushika Hokusai. Woodblock print. From book Kinoe no Komatsu (Young Pines).

Funnily enough, around the same time period, female pubic hair was graphically depicted in Japanese shunga (erotica), as part of the Ukiyo-e movement from the 17th – 19th centuries in which the main medium was woodblock printing. The dream of the fisherman’s wife (1814) by Hokusai is a famous example of this, showing a carefully detailed portrayal of the main subject’s pubic hair. This is far from the only example, though, and looking at works from this era is extremely refreshing after the insidious hairlessness of almost all of art history. Not only did these images have pubic hair, but they were enjoyed by people from all classes and by no means relegated to the margins. Considering that European painters in the second half of the nineteenth century were heavily influenced by Japanese art, this frequent portrayal of pubic hair might have had something to do with the shift in Western art from hairlessness to hairy.

The first major oil painting of a vulva with pubic hair is considered to be Fransisco Goya’s La maja desnuda, in 1797, and it caused a huge controversy. In the 1800s, Realist artists such as Gustave Courbet wanted to paint reality in an authentic way, and Courbet’s famous  (and controversial) L’Origine du monde showed pubic hair front and center. Since then, pubic hair has popped up more and more often in art history, from Egon Schiele’s famous nudes to Valie Export’s performance art.

As for your question, “what’s the deal?” – we don’t always know. The further we go back the harder it is to understand the cultural context. We can interpret the prevalence of hairless vulvas as a demonisation of female sexuality, as a view of pubic hair as unclean, or as a reflection of contemporary shaving practices. But whether we want it or not, modern depictions of hairless vulvas – in visual arts, photographs, movies or pornography – are not new and are probably not going to go away any time soon.

This post has been edited to include the word “vulva” as well as “vagina”, to acknowledge the limitations of “vagina” as a colloquial term referring to all parts of the genital region.

Artist Feature: Who is Tracey Moffatt?

Art History 101: The Difference Between “Genres” and “Genre Painting”